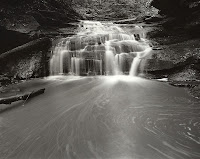 I exposed this negative at about 7:30am July 4th, 2012. After hiking up the creek bed I came to this falls which is not listed on the map. I first found it on Flickr while researching some new to me areas of McConnells Mill. The water, which has been low this year, was up after a thunderstorm the night before. The weather was sunny and foggy at the same time but the dappled light had not yet made it into the ravine, which is probably 75 feet deep at this point in the run. The light was low but fairly even, I had to hold my breath under the dark cloth in order to keep the ground glass and my loupe from fogging. 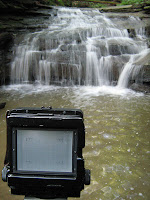 I used a Toyo 45AII, Nikkor 90mm SW f4.5 and TMY2 (Tmax 400) rated at ISO 250. I metered the white water at the base of the falls, the water in the pool, the wet rock faces without flow at the bottom right and left of the falls and several of the black areas with my Pentax 1 degree spot meter to come up with my exposure. Indicated exposure was 8 seconds at f22, I added two seconds of reciprocity compensation per a list made by Lee Lumpkin  (which he compiled from Howard Bond's data). I suppose 2 seconds is negligible in this situation but I always error on the side of more exposure and thought an extra couple of seconds might help lengthen the white stripes in the wading pool a bit. I exposed two sheets of film as is my usual practice. 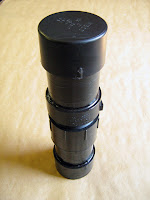 I have been experimenting with developing my 4x5 film in home made BTZS style tubes but instead of rolling them in water I use them upright as one would a 120 or 35mm stainless tank. I agitate for the first minute and then at the top of each minute thereafter. Agitation is by inversion. The tubes, when screwed together, hold double the amount of solution required to cover the film so each inversion causes all of the developer to leave the film and be replaced in a new position. Thus far development has been completely even, including the edges of the film.

I developed the first sheet for 15 minutes at 1:100. The shadows and midtones looked good but the white water was a little hotter than I wanted. For my second sheet I decided to increase the dilution to 1:140 to help tame the highlights and extend the development time 2 minutes to help keep the shadows up where I wanted them (all was done at 70degrees F). This negative looked great, the shadows had the same density as the first but the highlights had come down a nice amount. It was this second negative that I printed.

The print was made via contact on AGFA MCC 111 fiber paper using Ilford filters (grades 4, 5 and 1) over my old Nikkor diffusion enlarger with a 100mm lens projecting the light circle which just covers my 9x11 contact printing frame. I developed the print in PF 130 at 1:1 for two minutes. The print was then selenium toned with KRST at 1:100 for 2 minutes, this seemed to give the blacks just a bit more density.  My printing notes should be fairly clear to those familiar with MultiGrade printing techniques.  The F number refers to the aperture used and the G number to the filter grade.
Posted by Shawn Dougherty at 11:30 PM