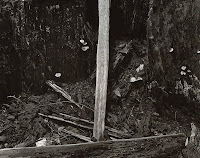 For some time now I have had a sort of visual bias against certain subject matter. Be it a waterfall, sunset or nautilus shell these subjects have been photographed again and again. At the same time I have held the belief that visual relationships in the context of my own personal experience is the real subject matter of my work. In other words, it doesn't matter what is photographed but how, when, and by whom it's photographed. 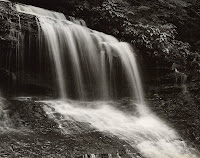 So, carrying this prejudice against cliched subject matter around with me not only conflicts with my most fundamental beliefs as an artist but also interferes with my ability to openly and honestly interpret the world around me. Photographically speaking, I aim to become an equal opportunity seeker of beauty and whether I'm focused on the fungus laden interior of a decaying stump or the powerful grace of a woodland falls, what's important is being open to the possibilities they each present. Both have been photographed before, but not in this moment, and never by me.
Posted by Shawn Dougherty at 6:14 PM