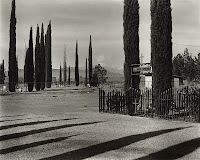 This photograph, from a Tularosa Cemetery, was my last on a March trip to Arizona and New Mexico. It was the 18th exposure I'd made with my 8x10 view camera that day and the second sheet of film in my final holder. While my traveling companions generously offered me use of their extras I was simply out of gas and ready to relax and enjoy my surroundings.

Later on we found our way to a hill top in the middle of the Tularosa Basin where the moment moved me to capture what I could, but this time with a pen and my trusty Moleskin.

3/10/09 Sometime in the late afternoon. Valley of Fires.
A young man plays his guitar and sings with quiet, brooding emotion as I look east from a perch atop the Tularosa Valley. Mount Carrizo looms large in the distance while the sun glistens off the snow shrouded peak of his big brother, Sierra Blanca. A soft breeze adds a slight chill to an otherwise warm and sunny day. The valley's yellow grasses come alive, blazing against the black lava strewn about me by some ancient event, still evident so many years later. Time has slowed to a crawl and troubles seem far away, nearly forgotten in the simple splendor of this moment. Sunshine and song reign supreme here. Even the yuccas pay homage, raising their many hands in worship and warmth. It's hard to imagine leaving this place... so many promises to keep.
Posted by Shawn Dougherty at 7:12 PM

Labels: from the Moleskin