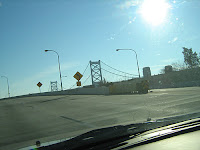 I'm back from several days on the PA highway system, traveling primarily to attend the opening reception of the Project Basho: Onward '08 show in Philadelphia. The place was packed and the space looked great. I was impressed with the diversity of work selected by the juror, Andrea Modica; the hard work of Tsuyoshi Ito and company for putting everything together; and most of all the gorgeous weather! 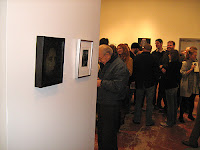 My print was well placed and allowed the viewer to get his or her nose right on it as I intend. The work is scheduled to hang through February so if you're in the area I highly recommend stopping by for a look (and grabbing a few pints of Sly Dog Dry Stout at the Standard Tap a couple of blocks away). 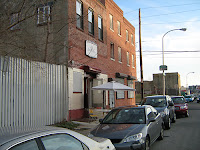 For two days before the show I was able to spend time photographing in the riverfront area of downtown Harrisburg and will be posting some of the results in the near future. Rain forced me inside for a morning which I put to full advantage working in the 150 year old Presbyterian Church on Pine Street. Later that afternoon I was given the gift of sunlight which immediately began burning off the haze and I made several exposures along the river and City Island. 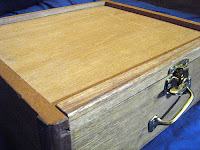 I was lucky to return with more than exposed film. I picked up a wonderful hand made print box from my buddy Joe Freeman when we met at the event in Philly. I gave him his choice of the prints I had brought with me and felt like I was stealing! It sure beats the hell out of carrying them haphazardly in the back of my car and offers considerably more protection. 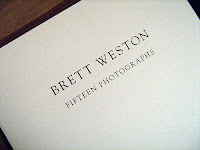 I also picked up my copy of the new Brett Weston Portfolio series being published by Lodima Press from my friend Richard Boutwell. He was kind enough to show me around his area of Bucks County and we were able to photograph for a few hours in some wonderful light before I started the drive back and my race to beat Sunday night's snowstorm through the Poconos. I didn't but the roads were quite passable, at least until I made it home.

Friends and family had loaded me up with Starbucks' gift cards over the holidays so I fueled myself with coffee practically nonstop. The chain seems ubiquitous in Harrisburg and isn't far behind on the toll road to Philly. I needed the extra caffeine as I decided to bring only my 8x10 camera after a summer spent working primarily with the 4x5. I'd forgotten how freeing it is to compose a photograph on the large ground glass as well as how heavy my big ass tripod is! No complaining though, I've already developed two of the large negatives and can't wait to get printing...
Posted by Shawn Dougherty at 12:47 AM