Rail and Bridges or A Bicycle Rode Through It 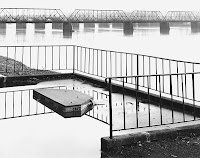 Enthusiasm for my newest work, made last week, has directed my attention away from Project Pond Scum... for the moment. This exposure was made along the Susquehanna River in Harrisburg on my way to the Onward '08 show at Project Basho. I had spent the night in a hotel a couple of miles away and woke up to rain and overcast skies. I made the best of the morning by visiting the local art museum, grabbing coffee and an apple scone at Starbucks, and photographing in a large 150 year old church downtown. I was lucky enough to be there while the organist was rehearsing, making two 9 minute exposures most enjoyable.

After observing the sun beginning to stream through the lovely and numerous stained glass windows I resolved to venture out. I made my way to the car and loaded my equipment with plans to drive to City Island. I decided I may as well take a look around the nearby riverfront area while I was there and walked about 50feet before noticing this incredibly still pool of water submerging the observation platform across the street. My view was from a far less interesting angle but I was already taken. I hurried back to grab my gear and returned to explore with the camera as quickly as I could, the sun was peeking through the clouds and rapidly burning moisture from the hazy afternoon air.

While I worked in the busy downtown area several people walked by, all avoiding the puddle. I couldn't help but wonder if they recognized what I did, or at least what I was trying to photograph, and took care not to disturb it... or whether they simply didn't want to get their feet wet. I was able to make two exposures long enough to smooth the glistening river before the sun permanently altered the scene. Still invigorated by this magical moment I hesitated to take down the camera. Moments later a bicyclist rode directly though the middle of the puddle, answering my question and motivating me to pack up. The resulting print fulfills all my expectations and further reflects my feelings for the ephemeral beauty we encounter everyday.
Posted by Shawn Dougherty at 11:52 PM