Fall at the Farm 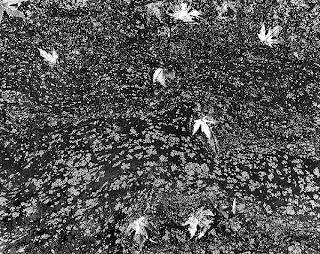 While fall is undoubtedly one of the most temperate and beautiful seasons in western Pennsylvania it always brings with it a familiar sense of melancholy. Like spring the center of the sun may be passing the equator at a certain time but the real first days of autumn are unmistakable and never marked on the calendar. Those days came unseasonably late this year and with almost no gradation. The warm weather broke and the leaves seemed to suddenly burst into flame.

The chores of fall; splitting wood, painting the roof, cleaning the chimney, raking and grinding the leaves... they have a certain sense about them as well. Pumpkins are everywhere, gracing doorsteps, windows, the front page of the local paper almost daily and they even showed up in the beer at the nearby brewery. Farmers are in overdrive with the year's final harvest and the sound of the high school marching band drifts up the hill from town heralding the arrival of a new football season.

All of a sudden you're wearing a jacket, long sleeves and keeping an eye open for the first sighting of your long invisible breath. A weekend campfire becomes more than a novelty and place to toast marshmallows and it doesn't take long to find it's way to the wood stove inside. Chestnuts and pumpkin seeds are the snack of the hour and finding a silly Halloween costume (Ansel Adams this year) becomes a serious priority.

One of the more subtle signs of fall around Campbell's Farm is the recession of the pond scum and it has taken on a new significance for me this year. I've noticed that the algae has a way of collecting things on it's surface; helicopter seeds in the spring, grass from the mowers and weed eaters in the early summer, even goose feathers in late August and September. Now colorful leaves float whimsically from the overhanging branches to dot the green and dark waters like radiant constellations, brilliant against the Milky Way on the clearest of nights. 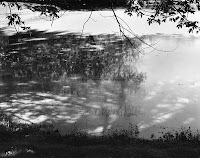 Tonight I loaded holders with the last 9 sheets of film I had dedicated to my Pond Scum Project. While there is still much printing, mounting, scanning, and publicizing to be done I couldn't help feeling a similar melancholy to that which fall brings with her. Of course it's mixed with excitement to realize the completion of my first major project but the mystery and unlimited potential of the unknown seems to be disappearing like those leaves hanging over the pond.

It seems the cycle persists indifferently, the air will continue to cool and the light to fade until the snow comes and with it a new set of happenings, emotions and photographic possibilities.
Posted by Shawn Dougherty at 10:38 PM