Algea in the Sky with Diamonds 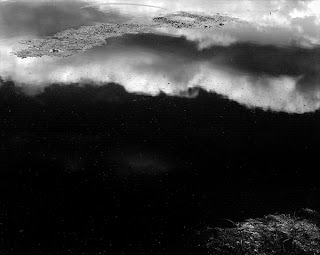 While some relationships in our landscape are easy to recognize others demand a little more of our attention to discover. Since I started my Pond Scum Project in earnest this summer I've been making all sorts of discoveries. With focused attention I've seen the ponds on Campbell's Farm in ways I never before considered. 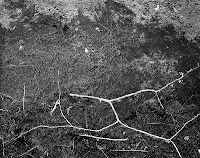 I've always been intrigued by the way an intimate look at nature so closely resembles the much broader view. I've seen these similarities between the alluvial fans of Death Valley and the way a spring run off shapes my driveway in Pennsylvania. Science has observed them between the smallest particles and the largest galaxies we've found. No greater photographic example exists than the aerial images of William Garnett and the closeup abstractions of Brett Weston. While their vision is markedly different the subject matter often times looks much the same despite the vast difference in scale. 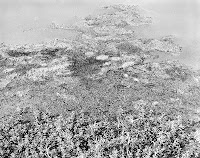 Now I've found these connections in my own work. A patch of light algea protruding into the dark water like a tropical shoreline. Patches of plants and layers of scum in the water resemble a river delta winding it's way out of a forest and into the sea. Sticks in the mud become lightning dancing across a twilight canvas and most recently I've watched a patch of algae soar with the clouds while smaller pieces sparkle like diamonds in the evening sky. These forced visual relationships reveal a larger picture, one that I can only suggest. It's up to the viewer to determine just what connections they uncover in my work, what they mean and, ultimately, draw their own conclusions. 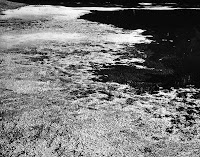 Posted by Shawn Dougherty at 11:58 PM