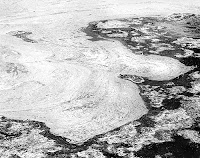 I currently have undertaken two long term projects photographing the Campbell's Farm and Shenango River Lake areas. I anticipate both taking years to complete. Recently I'd been reading some Brooks Jensen, publisher of Lenswork, and had determined that it was time I found something I could focus on and complete in the short term. About that same time I had been admiring the work of Paula Chamlee. She produced a whole series of photographic closeups of a soaped up window while traveling in Iceland. It was all very abstract and quite beautiful. 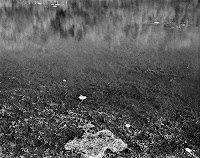 Not long ago a friend who stopped shooting 4x5 inch film gave me his leftover stash of Ilford Delta 100 and Ilford FP4+. It was expired but only by a year and had been kept in a proper environment. I did a couple of tests and counted the film. It was fine and there were over 100 sheets. I also had about 75 sheets of 4x5 inch film myself. Well, expired film and my desire to produce a series in a short amount of time seemed the perfect fit. 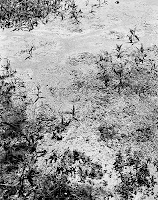 I needed something close to home, something that I could work without too much travel so I started looking through some of my photographs. I found one, a close up of pond scum made in 2005, that reminded me of one of Paula's soaped window pictures. A light bulb went off and I decided to start working on a sort of companion to my Cambell's Farm or Thereabouts series, focusing on the algae. At first I planned on making all closeup abstractions. As I started working I was drawn to many of the visual relationships created not only by the pond scum but its surroundings. I've never limited myself to specific types of photographs and felt this was no time to start. I came to the conclusion that as long as algae is somewhere in the frame it was good enough for me. 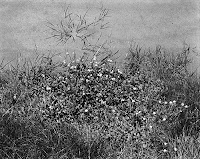 I plan on shooting all the film over the course of the summer (after which the scum begins to disappear anyway) and prune the images down to the best 10 to 15 ,then release them as a portfolio. I've made and printed 14 different compositions so far though I've used a bit more film than that making backups. The results have been extremely encouraging to say the least. I will be adding a special section to my website and will post the progress over the course of the summer and fall. I think it's important to work with something you know and I've been admiring the ever changing surface of the 6 ponds here for years. When everything falls together as it has for this project, I think it would be foolish not to respond. 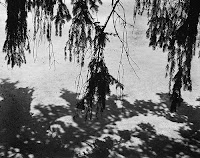 Please check www.shawndougherty.com for updates starting later this week. You can view Paula's Abstract Iceland gallery here. I also recommend picking up a copy of Lenswork if you're not yet familiar with it. They produce all the issues in a beautiful duo tone and have some of the highest standards among monochrome magazines.
Posted by Shawn Dougherty at 8:20 PM