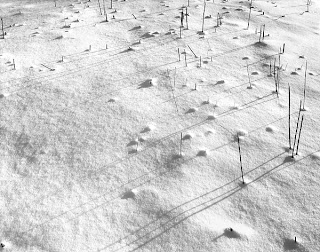 If there is any single idea that has not only informed my photography but also helped to define it, it is the notion that the real subject of great photographs are visual relationships - the way objects in the picture relate not only to each other but also to the edge of the frame. The implications of that idea are far reaching and were easier, at least for me, to grasp in my earlier days of picture making than the idea itself.

The most profound of those implications, that great pictures can be made anywhere and in any light, was something I relized early and was reinforced by experience. While my images of the Susquehana River and it's bridges were made on a day that was truly exceptional much of my best work has been made in far less fantastic situations.

Not long after my trip to Harrisburg I made the short drive to my favorite area of the Shenango River Lake to look for pictures. The lake is formed by a large dam and the water level had been altered submerging most of my destination under a foot or more of water and forcing me to stop in a small parking lot near the edge of the newly formed shoreline. The sun was low and I had little time to drive somewhere else so I decided to grab my camera and see what I could see. Just across the road was a small grass covered hill. Most of the grasses had succumbed to the blanket of snow but some were still standing and casting shadows many times their length. The effect was incredible and I quickly set up my camera! Not long into the process a truck pulled up beside me and the driver asked what I was doing. I told him I was making pictures to which he laughed and said I must be crazy to take pictures of the ground. He watched for a moment, wished me luck and went on his way. 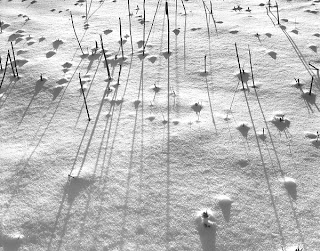 Without further distraction I was able to work intently in the angular, late afternoon light. I ended up making two exposures. The first being a subtle exercise in asymmetrical tension with a large area of negative space. The second was much more direct and featured a central blade of grass that seem to be presiding over the rest. Both seem to elevate the mundane to quite dramatic effect.

While no one questioned me as I made pictures in the foggy wonderland of Harrisburg a month earlier the lone soul I saw this particular day took me for a fool. I've shown both sets of images to several people and each of the four images seemed to have a similar impact. Aside from coming away with great prints and experiences I learned a valuable lesson those days. It's not what's in front of the camera but the person behind it that determines the success of a photograph.
Posted by Shawn Dougherty at 6:17 PM