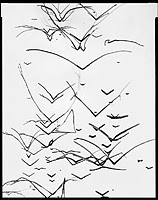 I recently decided to embark on a second long term project, photographing the Shenango River Lake and it's surroundings. The lake was created in 1965 when the Army Corp of Engineers built the Shenango Dam. The lake displaced my mother and her family, forcing them to move to a neighboring community. I've spent much time there myself - picnicking when I was young - night swimming, fishing and boating as I grew older. It's a comfortable and meaningful place for me to work and it is in a constant state of flux as the water level changes frequently.

I drove there after work last Wednesday with my 4x5 camera and after a hour or so found this wonderful group of sticks protruding from the water. I had one sheet of film left which I quickly used. I felt there was more there than I was seeing and decided to return the following night with the 8x10 camera and more film.

The next night I drove straight to this place and, being earlier, there was more light on the water. I began setting up to the dismay of a young family watching their son swim a few hundred yards to my right. I couldn't help overhear their conversation which did eventually lead to a consensus: the big green thing was a camera, like Ansel Adams used, and I must be crazy taking pictures of sticks in the water...

Once I was set up I quickly forgot about everything else and began working under the dark cloth. After repositioning the tripod a couple of times I found a perspective that isolated the sticks and reflections. From this new position the scene took on the look of a flock of birds in flight! I quickly tightened down the camera, loaded a film holder and took a meter reading. There was only a stop and a half difference in brightness between the top and bottom of the water, little enough I knew I could print it evenly. I waited for the wind to still, pulled the lens cap for 5 seconds and just KNEW I had something.

A printing session on Saturday confirmed my excitement as the photograph was fairly easy to make and looked even better than I had hoped. From those I've shown so far the appeal is wide. It's incredibly satisfying, the feeling that I have really created something new and not merely recorded what was in front of me. Of course I can't help but wonder what the family at the lake would think of it.

You can view a larger version HERE.
Posted by Shawn Dougherty at 5:31 PM