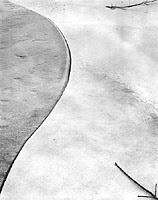 I made this exposure in February of 2005. For some reason or another it kept getting pushed back in the printing rotation until last Friday, 2 years later.

I remember that day quite well. The weather had been bitterly cold for some time and was just begining to warm up. It was a weekend, Saturday I believe, and I decided to take a ride to Shenango River Lake. There is one main bridge that crosses the lake at one of it's thinnest points and continues for some distance as a causeway. After crossing to the north you can drive back along the western side for a few hundred yards. I did this and got out when I feared my little truck would get stuck if I went any farther. I'd never been to this sliver of land between causeway and lake before and decided to explore. I packed up and walked for some time admiring the ice covered water to my right. I set up my camera once along the way but wasn't inspired to make a picture.

As I was nearing the bridge and end of the penninsula the ground became covered with large sheets of ice and frozen snow. It was creaking underfoot while I made my way along and suddenly I came upon a sweeping crack between two large plates immediately in front of me. The plate on the left had been saturated with water at some point and was considerably darker than the one beside it. I quickly set up my camera and began working with this extraordinary form. There were a couple of branches laying on the beautifully textured, snow covered ice sheets and I was having trouble eliminating them from the frame. I considered walking around the potential picture space to remove them but was afraid I would further crack the ice. Rather than risk disturbing that beautiful line I tried including them in the frame. Eventually I found a spot where I could incorporate both branches in a way that related to the rest of the image and the line of the crack seemed to take on the shape of the female form. I knew I had something and was excited enough to make a backup exposure. At almost 3 bucks a pop it was not something I normally did.

After getting lost in a shuffle of negatives and intentions I rediscovered them on Friday. I was looking to create a photograph to offer as a new Special Edition print and decided to give it a shot. After finding my base exposure I noticed a finger print in the emulsion of the first negative that showed quite noticably on the print. I nervously checked the back up negative I had made and found it was fingerprint free! I thanked the photography gods I had made a second exposure and continued printing. I worked out a base time of 10 seconds and then burned the negative for an additional 12 seconds while gradually covering the paper from bottom to top. I couldn't be happier with the results and decided to indeed offer it as my current Special Edition print.
Posted by Shawn Dougherty at 6:45 PM